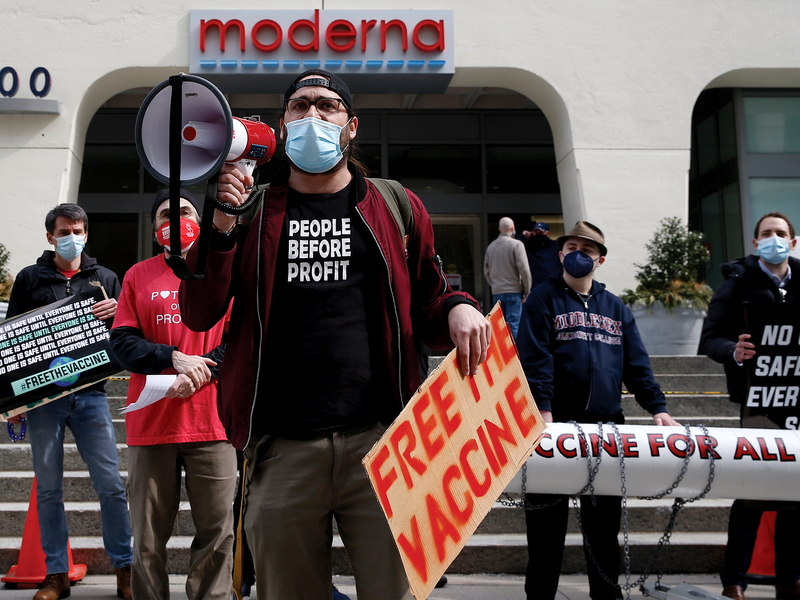 “Once you start saying that a particular type of intellectual property is no longer going to be respected, people start worrying about: What’s the limiting principle here? What’s stopping you from applying this to other settings?” says Craig Garthwaite, a health economist at the Kellogg School of Management at Northwestern University.

In the case of COVID-19, waiver advocates say the move would help increase vaccine availability globally, preventing the virus from spreading and generating new variants. Patent protections make vaccines more costly, an obstacle to widespread immunization in developing countries like India, the current epicenter of the pandemic.

But critics argue that waiving patents will do little to increase supply and could instead promote an influx of unsafe or less effective shots, hindering the world’s ability to end the pandemic and jamming up supply chains in the process.

Albert Bourla, CEO of COVID-19 vaccine manufacturer Pfizer, warned in a recent open letter that “entities with little or no experience in manufacturing vaccines are likely to chase the very raw materials we require to scale our production, putting the safety and security of all at risk,” if patents are waived.

In the long run, suspension of COVID vaccine patents could embolden advocates to push for waivers on other patented treatments, diagnostic tools and personal protective equipment. Such waivers could threaten drugmakers’ profits, lessening their appetite for the investments needed to develop new treatments that save lives and ease suffering.

“It’s very easy for the mind to wander to other medical situations that are widespread in nature and it makes you wonder, are they important enough to make governments consider waiving patent rights in the future,” says Mark Remus, partner and chair of the Litigation Practice Group at intellectual property law firm Brinks Gilson & Lione. “What if somebody came up with the miracle cure for cancer? . . .Once you start going down that slope, where do you stop?”

The waiver, which could temporarily enable manufacturers to bypass patents and produce vaccines created by COVID-19 drugmakers, requires unanimous support from the 164-member World Trade Organization. Some other developed countries like Germany appear unlikely to back the proposal. But experts wonder if the Biden administration’s support might signal a sea change toward giving the government more power over companies’ patent rights.

“We must make vaccines, testing and treatments accessible everywhere if we are going to crush the virus anywhere,” wrote 10 senators—nine Democrats plus independent Bernie Sanders—in an April letter to President Joe Biden.

Versions of the debate tend to surface during public health crises—from the AIDS epidemic to the anthrax attacks following 9/11. And this isn’t the first time patent rights have come up in relation to the COVID-19 pandemic.

Early last year, the Financial Times reported that North Chicago-based AbbVie was waiving patent rights for its HIV drug Kaletra, which was used to treat COVID-19 patients in other countries. The drug eventually fell short in clinical trials.

AbbVie referred questions to trade group Pharmaceutical Research and Manufacturers of America, which opposes the waiver.

Meanwhile, the Government Accountability Office in March released a report showing that the U.S. spent about $162 million to get Gilead Sciences’ antiviral drug remdesivir approved to treat COVID-19. However, the funding didn’t result in government patent rights since “federally-supported research did not generate new inventions,” the report says.

“What COVID has made people realize is the existing system of making and distributing pharmaceutical products, PPE, ventilators, medical diagnostics, testing—all the things we need to address a pandemic—that the intellectual property system is not working well to satisfy those worldwide needs,” says Joshua Sarnoff, a law professor at DePaul University. “Some of that is a lack of sufficient production. Some of it has to do with hoarding.”

Some industry observers say waiving IP protections for COVID vaccines could open the door to discussions about expanding access to ventilators or diagnostic testing, for example. North Chicago-based Abbott Laboratories, which has poured money into developing a series of COVID tests since the pandemic started, didn’t respond to a request for comment about the potential waiver.

A big concern for many companies, particularly as it relates to mRNA vaccine technology, is that transferring trade secrets now could lead them to lose competitive advantages in the future, industry experts say. That could influence pharmaceutical companies’ “long-term strategies in the marketplace, as well as patenting strategies,” Remus says.

“Companies may be disinclined to file patents and instead seek to protect their technology through trade secrets,” he warns. “That way they’re not disclosing something and having it given away for free at the discretion of the government.”

The number of international homebuyers declined sharply throughout the United States in the past year amidst the global COVID-19 pandemic, according … END_OF_DOCUMENT_TOKEN_TO_BE_REPLACED

Tom Rodeno, 50, a 20-year veteran in representing industrial spaces for Colliers International, based out of the Rosemont office with the title of … END_OF_DOCUMENT_TOKEN_TO_BE_REPLACED

Chicago’s city officials move the deadline for submitting a proposal for the planned casino to October 29, looking for more bidders. Chicago … END_OF_DOCUMENT_TOKEN_TO_BE_REPLACED

A community in western Illinois has officially disbanded its police department over budget concerns. East Galesburg has been without its police … END_OF_DOCUMENT_TOKEN_TO_BE_REPLACED

The officer who died was the first Chicago cop shot and killed in the line of duty this year, Brown said. It's the first line-of-duty shooting … END_OF_DOCUMENT_TOKEN_TO_BE_REPLACED