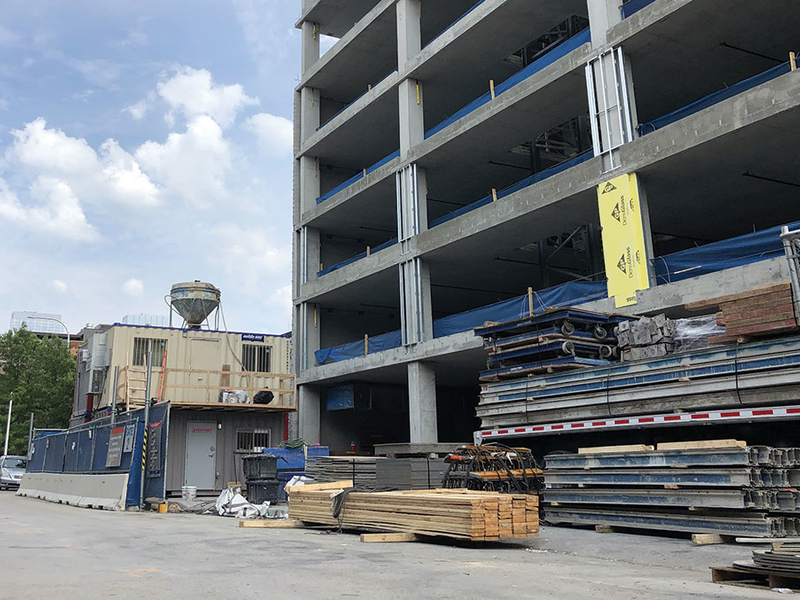 “It is like nothing I’ve ever seen in my career,” says MacGregor, who launched Accend in 2019 after nearly a dozen years with Chicago-based Skender Construction.

Delays in actually getting materials cause an equally thorny problem. With COVID bolstering residential homebuilders—residential construction starts in the Chicago area over the first four months of the year rose 30 percent from the same period in 2020 to $1.6 billion, according to New York-based research firm Dodge Data & Analytics—the nation’s wood supply has been sapped. Now wood door suppliers that would normally get them into buyers’ hands in a few weeks are quoting more than three months for delivery, some contractors say. Bar joists that support floor structures have gone from 12 weeks for an order to come through to upwards of nine months. Some suppliers are forecasting six months to get insulation products.

The shock is starting to reverberate in the office world, where tenants looking to renovate workspace for their soon-to-return employees are finding it may take two or three times longer than expected to complete certain parts of the job, and it could cost a lot more.

Colliers leasing broker Michael Lirtzman says some tenants that were hoping to make major changes to their space have scaled back plans because of pricing uncertainty.

“Some have said we’re going to stay put and kill construction for now or rein in the scope significantly. Two or three years ago it was the opposite, when every tenant wanted to push the envelope,” Lirtzman says.

One downtown landlord who declines to be identified was prepared two months ago to finance a major office upgrade for a tenant in exchange for a lease renewal, but the company came back this month asking them to cover a construction budget that was 30 to 40 percent more expensive. “It’s putting the deal at risk,” a spokesman for the landlord says.

Some of the rising costs have been mitigated by contractors desperate to keep their workers busy and bidding so low on jobs that they virtually erase their profit on some projects. But that’s expected to fall away as the pandemic dwindles and development picks up.

“Higher material prices are expected to continue through the end of this year and are the most significant downside risk facing the sector,” Dodge Chief Economist Richard Branch says in a statement.

The price volatility is especially tricky for companies that want to renovate or redesign their workspace for a post-COVID world but are waiting to see how employees want to use their space before making any long-term decisions, says Mike Yazbec, president of Chicago-based office interior build-out specialist J.C. Anderson. As companies try to budget for how much that work will cost 90 days from now, contractors can’t make any confident predictions.

“We’ve got big, bold letters on every proposal that say we can only hold this price for 15 days,” Yazbec says.

Some developers are considering putting projects on hold entirely with the hope things will normalize during the second half of the year, though inflation on the horizon could mean it’s going to get worse.

Joe Pecoraro, who oversees multifamily construction work for Skender, says some apartment developers that have spent the past year or two lining up projects are now facing the reality that they may cost up to 10 percent more than they budgeted because of the cost of materials.

With little visibility into if or when the price of certain materials will return to more normal levels, he’s advising clients to either buy certain materials way ahead of time or be more flexible with designs to ensure they don’t run into trouble.

“If you know you want your building lobby to be tile, you could say you want that exact tile and get it now, or you could say you want a tile of this quality and whatever we get when we get it is what we use. You can’t straddle the middle in no man’s land,” he says. “If your project is being delayed because you’re waiting on a tile, that’s a bad situation.”

The number of international homebuyers declined sharply throughout the United States in the past year amidst the global COVID-19 pandemic, according … END_OF_DOCUMENT_TOKEN_TO_BE_REPLACED

Tom Rodeno, 50, a 20-year veteran in representing industrial spaces for Colliers International, based out of the Rosemont office with the title of … END_OF_DOCUMENT_TOKEN_TO_BE_REPLACED

Chicago’s city officials move the deadline for submitting a proposal for the planned casino to October 29, looking for more bidders. Chicago … END_OF_DOCUMENT_TOKEN_TO_BE_REPLACED

A community in western Illinois has officially disbanded its police department over budget concerns. East Galesburg has been without its police … END_OF_DOCUMENT_TOKEN_TO_BE_REPLACED

The officer who died was the first Chicago cop shot and killed in the line of duty this year, Brown said. It's the first line-of-duty shooting … END_OF_DOCUMENT_TOKEN_TO_BE_REPLACED