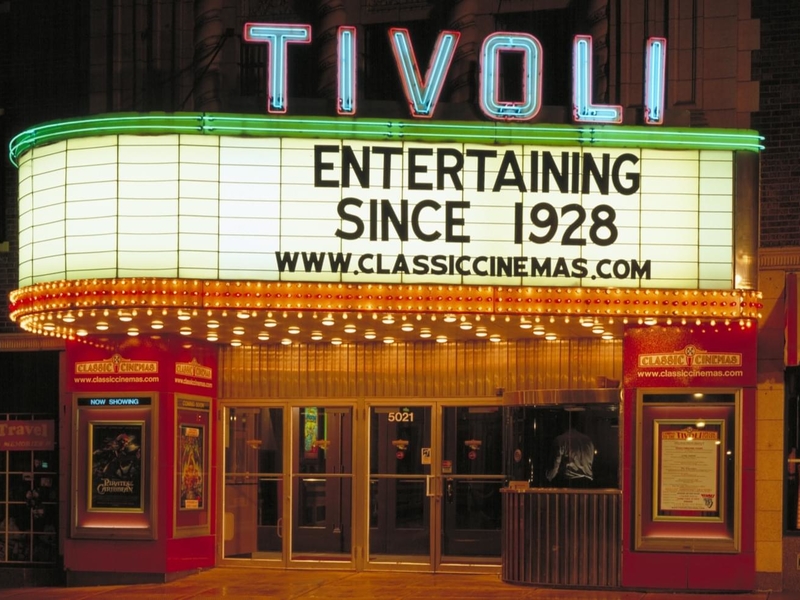 In all corners of the pandemic-ravaged economy, ranging from gyms to hotels to restaurants, movie theaters have suffered as much as anybody. The state of Illinois at various points has allowed operators to reopen under rules that restricted attendance to 25 or 50 people per screen, hardly enough to pay for a janitorial service. But the ultimate insult came from the big Hollywood studios, with companies like Disney and Warner Brothers deciding last year to hold back their new films altogether and show them on subscription video streaming services instead.

Johnson reports his revenues plummeted 93 percent when the virus hit last year after a buoyant 2019 year in which Classic, operating as a subsidiary of Downers Grove-based Tivoli Enterprises, grossed $41 million in revenues and kept a staff of 460 employed. Competitors include most notably the publicly-traded goliath AMC Entertainment Holdings, which has scrambled in recent weeks to renegotiate its debt to stave off bankruptcy and keep its 1,000 locations from being taken over by landlords.

The National Association of Theatre Owners of Illinois, which Johnson serves currently as president, estimates there are nearly 2,000 movie screens in the state. Johnson believes at least 100 have closed permanently. The casualties have included the Navy Pier IMAX Theater, owned by AMC, the Cinemark 18 in downtown Evanston and the Randall 15 in west suburban Batavia, formerly owned by the bankrupt Goodrich Quality Theaters chain in Michigan.

Every movie operator has been hurting, of course, but in an interesting twist it appears that privately-owned chains like Classic Cinemas have survived the pandemic in better shape than bigger publicly-owned rivals. The reason: the public companies, AMC included, made a practice of maxing out their leverage by selling off theaters and leasing them back. Many of the private operators, in contrast, own their own real estate and carry far less debt.

Survivors include William Schopf, the owner of the 750-seat Music Box Theatre (plus a smaller 75-seat auditorium) on Chicago’s North Side. “I own my theater and carry little or no debt,” says Schopf. “The big chains have got leases to pay and most of them carry too much debt that has to be repaid.”

Schopf, who is 72, says that his ownership formula at the Music Box “is a product, in part, of my age. Most people at my age don’t borrow a lot of money. But if I were 45 years old and looking to maximize my returns by taking out mortgages on my real estate and debt on top of that I might not have gotten through this. As it turned out, I’ve been losing money, but it’s money that I had available to lose.”

Johnson is just 54 and has inherited Classic Cinemas from his parents, Willis and Shirley Johnson. The family, like Schopf, has taken a conservative path in real estate, owning outright 11 of their 15 theaters, some of them historic structures like the 1,000-seat Tivoli in Downers Grove, built in 1928. But things might have turned out differently: as CEO of Classic in the 1990s Willis briefly toyed with the idea of taking his company public, and sent his son Chris to the University of Chicago to get an MBA with the express purpose of negotiating with public stock underwriters after graduation.

An IPO never happened, and Chris Johnson is thankful as he watches publicly-operated companies like AMC, which has been in a year-long fight with both shareholders and creditors, flounder. “As it turned out, taking this company public wasn’t for me,” he says. “In public companies there is too much short-term focus. I want to be able to do what I want and make investments that don’t make sense to other theater operators. For instance, we give out free mints to each customer after every show. That costs $30,000 a year. I’m not sure I get a direct return on that. Same at the concessions counter—we offer free refills on cold drinks. That means my concession costs run higher than at other theaters. And yet I’m investing in goodwill for the long term. Quality doesn’t cost money; it pays dividends eventually.”

On the subject of liabilities, Johnson says that he keeps his operating expenses—a combination mostly of rent and taxes and mall fees—capped at about 12 percent of his operating revenue in a regular year like 2019. Public companies, according to their filings, regularly go over 50 and even 60 percent. “For them, they can have amazing top line revenues, but then 60 cents of everything they earn gets used to pay bills,” Johnson observes. “That’s taking an awful lot off the top.”

Johnson took $1.6 million in Paycheck Protection Program loans from the federal government last year and has applied for more assistance through the Shuttered Venue Operating Grant program administered by the U.S. Small Business Administration. That could win him as much as $10 million this year. Through the past year, he has been able to keep nearly 50 of his employees working, though the PPP loans haven’t been enough to pay for all of that, he admits.

At the Music Box, Schopf, who declined to apply for a PPP grant, has kept his company afloat through myriad ventures. For one, the theater has offered its concessions, including popcorn and beer, to customers on a take-out basis. Last summer the Music Box repurposed a garden area out back for seating for 25 people being offered drinks and outdoor movies. Nearby it sponsored the new Pilsen ChiTown Drive-In in a factory parking lot, drawing 100 cars a night and showing horror films every day through the month of October.

“My idea was to earn some money and keep my employees interested. Most people would rather be productive than sit at home,” Schopf says.

The industry downturn has brought opportunity for some companies. Last summer, in July, Classic Cinemas acquired the closed 11-screen Goodrich Theater in suburban Oswego. Later this week, Schopf is scheduled to visit the shuttered Evanston Cinemark with an eye to bidding on it. “I won’t do anything stupid. But as people know I’m not adverse to taking on some risk,” he says.

The outlook is brightening as films are poised to enter regular distribution again. A week ago the monster movie “Godzilla vs. Kong” grossed nearly $50 million on 3,064 screens, including the Music Box, around North America. Classic will reopen in the coming week showing “Godzilla” along with such Oscar hopefuls as “Nomadland,” “Mank” and “The Trial of the Chicago 7.”

“I’m bullish on this industry for the long term,” Johnson says. “The essence of a movie theater is the excitement in getting out of the house for an exclusive event you attend along with other people. That feeling will survive the pandemic.”

The number of international homebuyers declined sharply throughout the United States in the past year amidst the global COVID-19 pandemic, according … END_OF_DOCUMENT_TOKEN_TO_BE_REPLACED

Tom Rodeno, 50, a 20-year veteran in representing industrial spaces for Colliers International, based out of the Rosemont office with the title of … END_OF_DOCUMENT_TOKEN_TO_BE_REPLACED

Chicago’s city officials move the deadline for submitting a proposal for the planned casino to October 29, looking for more bidders. Chicago … END_OF_DOCUMENT_TOKEN_TO_BE_REPLACED

A community in western Illinois has officially disbanded its police department over budget concerns. East Galesburg has been without its police … END_OF_DOCUMENT_TOKEN_TO_BE_REPLACED

The officer who died was the first Chicago cop shot and killed in the line of duty this year, Brown said. It's the first line-of-duty shooting … END_OF_DOCUMENT_TOKEN_TO_BE_REPLACED