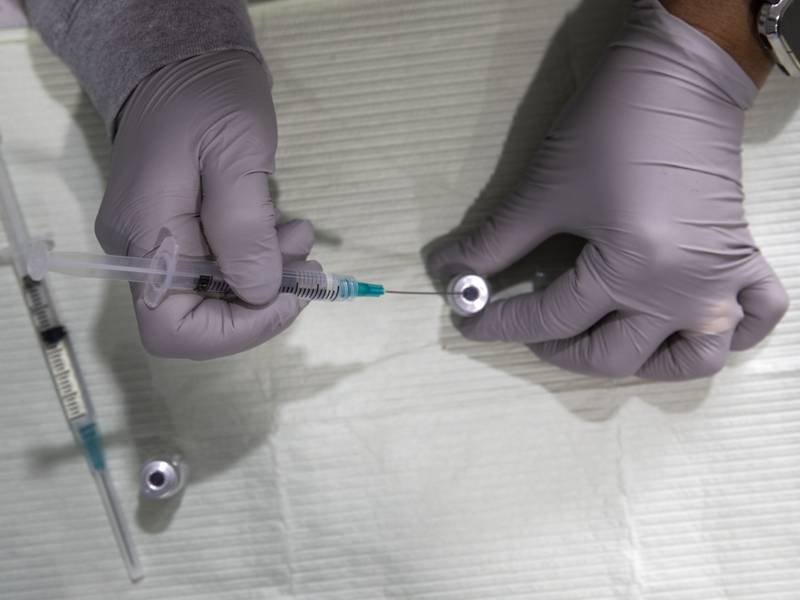 Earlier, American Federation of Teachers President Randi Weingarten said that “vaccinations must be negotiated between employers and workers, not coerced.”

“Health-care professionals are concerned that mandating vaccines outside contract negotiation will only result in more people leaving the bedside at a time when staffing levels are already low from the trauma of the past year,” Weingarten said in a news release.

In New York City, unions representing firefighters and paramedics spoke out against Mayor Bill de Blasio’s announcement that workers must get vaccinated or tested weekly, with some expressing concerns about possible side effects from a vaccine, according to the New York Times.

In California, the largest state worker union signaled it intends to fight Governor Gavin Newsom’s mandate that state employees provide proof of vaccination, or else go masked and submit to regular testing, according to the Sacramento Bee. The requirement is a change in working conditions and negotiations are called for, Local 1000 of the SEIU said in a July 27 letter posted online.

State and local authorities generally have broad powers to require vaccinations, but there’s a debate over whether the federal government has that power while the inoculation is being used on an emergency basis, as it is now, said Mike Jones, a Philadelphia-based an employment attorney with Eckert Seamans.

Once a vaccine receives full approval from the Food and Drug Administration “there’s no question at that point that the government can impose a mandate” for federal workers to receive the vaccination, said Jones.

However, the administration would still need to negotiate how a mandate is implemented, and “under some circumstances” unions could stop the plan. It would depend on nuances of state, federal and local law, and the wording of contracts, Jones said.

Biden is expected to say federal workers will be required to prove they’ve been vaccinated against Covid-19 or submit to frequent coronavirus testing and other mitigation steps, according to a person familiar with the matter.

The Biden administration laid out a series of steps to fight the virus surge. The Centers for Disease Control and Prevention advised Americans to wear masks in public indoor places in areas with substantial spread. And the Department of Veterans Affairs decided to require front-line health care workers to be vaccinated.

The so-called requirement expected from the White House is in fact “really a strong encouragement,” said Jones.

“It’s an inducement to go out and get the vaccine for people that are persuadable,” Jones said. “It’s not an easy sell. The people that don’t want to get vaccinated strongly and emotionally hold that position.”

Emotions surrounding Covid mandates are complex, and “you will see it vary” by bargaining unit, Jones said.

Shearon, of the professional and technical engineers, indicated his unit would agree to a White House plan.

“I don’t believe in a life-and-death situation we should be standing in the way,” Shearon said.

The National Fraternal Order of Police, which is the world’s largest police union, heavily lobbied the White House and other federal agencies to get police officers first dibs for the Covid-19 vaccine, according to executive director Jim Pasco. But their efforts haven’t been enough to sway some in law enforcement to get the shot.

“Officers, like any American, are going to follow their conscience,” Pasco said in an interview. “But, because science has proven vaccines to work, I ask that they carefully consider the scientific information that’s available to them and make sound decisions.”

“The position of national FOP is that the vaccine works, and we strongly suggest that anybody who can get it should,” Pasco said. “We’re a union. We don’t tell people what to do.”

The number of international homebuyers declined sharply throughout the United States in the past year amidst the global COVID-19 pandemic, according … END_OF_DOCUMENT_TOKEN_TO_BE_REPLACED

Tom Rodeno, 50, a 20-year veteran in representing industrial spaces for Colliers International, based out of the Rosemont office with the title of … END_OF_DOCUMENT_TOKEN_TO_BE_REPLACED

Chicago’s city officials move the deadline for submitting a proposal for the planned casino to October 29, looking for more bidders. Chicago … END_OF_DOCUMENT_TOKEN_TO_BE_REPLACED

A community in western Illinois has officially disbanded its police department over budget concerns. East Galesburg has been without its police … END_OF_DOCUMENT_TOKEN_TO_BE_REPLACED

The officer who died was the first Chicago cop shot and killed in the line of duty this year, Brown said. It's the first line-of-duty shooting … END_OF_DOCUMENT_TOKEN_TO_BE_REPLACED