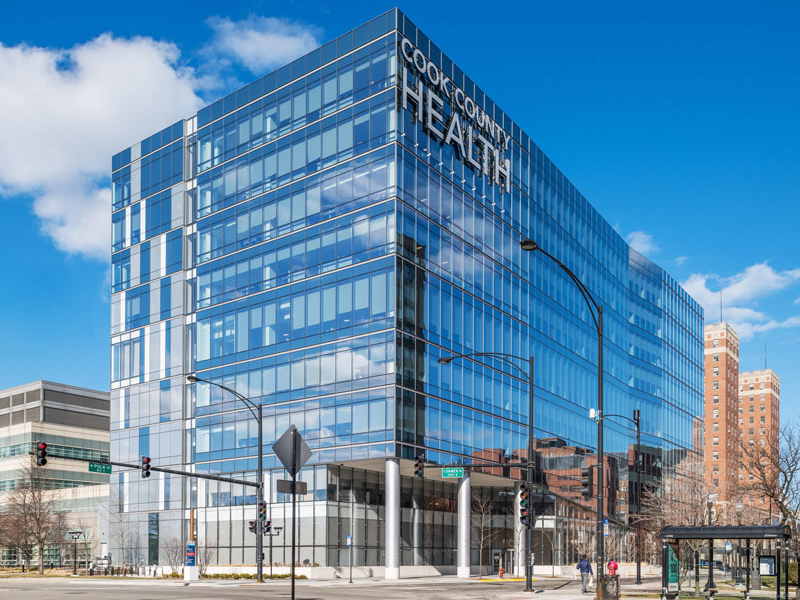 Local 73 has about 2,500 Cook County employees, with about 1,500 of those working for Cook County Health, the local said. About 2,000 Local 73 workers were on strike, with nearly 500 workers from CCH and the sheriff’s department enjoined from striking by court order.

The two economic issues remaining relate to “raising the wage floor for lowest-paid workers and changing anniversary pay raise steps to reward longevity,” a press release said. Local 73 will put the two issues before a panel of arbitrators “to review the facts of the contracts County President Toni Preckwinkle and her negotiating team agreed to with the other unions,” the release said.

Cook County Board President Toni Preckwinkle said in a press conference that she was disappointed in the leadership of SEIU Local 73 whose “workers were out on strike for 18 days and they got basically the same deal as everyone else.”

While Cook County reached deals with registered nurses, the Fraternal Order of Police, AFSCME and the teamsters, which Preckwinkle said were basically the same as its offer to SEIU workers, Local 73 rejected that offer and a subsequent offer it said did not measure up to what other unions were receiving.

Preckwinkle praised Cook County Health CEO Israel Rocha Jr. for meeting the challenge of being short-staffed without shutting down major service. But, she said, she feared the strike would wind up damaging relationships with a union that she has long admired for organizing the lowest-paid workers in county government.

“President Preckwinkle could have avoided this entire strike if she came to the negotiating table anytime during the last 10 months and offered Local 73 members the same agreement she offered to other unions working for the county, but she wouldn’t do it, furthering a long history of disrespect of Local 73 members at the county.”

The statement also said: “Without our strike, we would not have won many of the victories in our tentative agreement which address the longstanding issue of treating Local 73 members as second-class citizens compared to other Cook County workers. Interest arbitration wasn’t even an option to resolve our outstanding issues without the bravery shown by our members by staying on the picket lines for 18 days. To say otherwise is the same as putting one’s head in the sand to ignore the realities of the world.” READ MORE.

UCHICAGO MEDICINE REQUIRING EMPLOYEES TO BE VACCINATED: The University of Chicago announced Tuesday that every university employee is expected to get fully vaccinated or seek an authorized exemption. In May, U of C mandated that as of the fall semester, students must be vaccinated. The university’s health system, UChicago Medicine, will aslo require vaccination, according to an internal memo obtained by Crain’s. READ MORE.

COALITION OF INFECTION PREVENTION GROUPS URGE VACCINE MANDATES: A group of seven epidemiology and infectious disease societies says hospitals and other health care facilities should require employees to be vaccinated against COVID-19.

The coalition, led by the Society for Healthcare Epidemiology of America, says in a paper that exemptions should be made for those with medical contraindications and others circumstances.

“The COVID-19 vaccines in use in the United States have been shown to be safe and effective,” David J. Weber, a member of the SHEA Board of Trustees and lead author of the paper, said in a statement. “By requiring vaccination as a condition of employment we raise levels of vaccination for health care personnel, improve protection of our patients, and aid in reaching community protection. As health care personnel, we’re committed to these goals.”

In June, during a Special Meeting of its House of Delegates, the Chicago-based American Medical Association laid out these recommendations before vaccines should be mandated:

The AMA said a vaccine should receive full approval from the Food & Drug Administration through a Biological Licenses Application; that mandates should follow the recommendations of the Advisory Committee on Immunization Practices, that individuals should be given “meaningful opportunity to voluntarily accept vaccination,” and that mandates not exacerbate inequities or adversely affect already marginalized populations.

“While vaccines are highly effective public health tools, vaccine mandates are a blunt instrument and may carry the risk of eroding trust and undermining public health goals,” AMA President Dr. Gerald E. Harmon said in a statement. “We can reach herd immunity with a robust public campaign which would have the benefit of respecting patients’ autonomy and minimize disproportional burdens on marginalized communities. Failure to achieve herd immunity is more likely to result in mandates.”

CHICAGO PUTS 2 STATES BACK ON TRAVEL ADVISORY: The Chicago Department of Public Health said Tuesday that it was returning Missouri and Arkansas to its Travel Advisory list after several weeks of having no states on the list. Recent increases in COVID-19 cases have pushed the two states back past the mark of 15 cases per day per 100,000 residents, the department said in a statement. Any unvaccinated people traveling from Missouri or Arkansas are advised to obtain a negative COVID-19 test result no more than 72 hours prior to arrival in Chicago or quarantine for a 10-day period upon arrival.

CDPH also warns that according to data from the Centers for Disease Control & Prevention, case rates are increasing, with the U.S. Virgin Islands, Nevada, Louisiana, Utah, Wyoming and Florida at risk of passing the threshold. The statement also said that almost all new COVID cases, hospitalizations, and deaths—about 99 percent—are among unvaccinated people.

U of C RESEARCH CALCULATES COST OF MEDICAID BILLING PROBLEMS: The money lost in Medicaid billing problems takes a much larger bite out of doctors’ potential revenue than losses from Medicare and commercial payers, a key reason some doctors won’t accept Medicaid patients, according to an economist at the University of Chicago Harris School of Public Policy.

Medicaid revenue losses due to haggling over reimbursement payments and denial of care from Medicaid and Medicaid health plans, amounts to about 17 percent, compared with 5 percent loses for Medicare and 3 percent for commercial payers, according to research led by U of C economist Joshua Gottlieb.

“The administrative hoops result in what can be seen as a kind of new tax on doctors, causing many to choose not to see Medicaid patients,” according to a statement from the Harris school.

The study, A Denial a Day Keeps the Doctor Away, was conducted by Gottlieb and a team from Columbia University, the National Bureau of Economics Research, the Bureau of Economic Analysis and the Federal Reserve Bank of San Francisco.

SAFETY-NET HOSPITALS IN DANGER OF LOSING DRUG DISCOUNT PROGRAM: Some hospitals serving large numbers of low-income patients are at risk of getting kicked out of a popular federal discount drug program as the fallout from the pandemic’s unprecedented impact on health care providers continues, Modern Healthcare reports.

The 340B program, which allows qualifying hospitals and providers to buy deeply discounted drugs from manufacturers, has strict eligibility requirements and an annual recertification process. Providers must show that a certain percentage of patients they served in the year prior were low-income or on Medicaid.

But a Modern Healthcare analysis of available cost reports shows 26 percent of disproportionate-share hospitals (DSH) could be vulnerable if the percentage of DSH yet to be reported in their 2020 cost reports falls below the threshold to participate in the program. For hospitals designated as Rural Referral Centers or Sole Community Hospitals, about 10.6 percent could be in danger of being affected.

“Many hospitals are already facing financial concerns due to the pandemic, and then on top of that, these hospitals are also worried about losing their 340B eligibility due to the changes—temporary changes, we expect—brought on by the COVID pandemic,” said Aimee Kuhlman, senior associate director of federal relations at the Chicago-based American Hospital Association, which has asked the Biden administration to allow hospitals to stay in the program even if the pandemic has put them below the threshold.

PEOPLE ON THE MOVE
Katie Hayes
has been promoted to chief financial officer at Water Street Healthcare Partners, a Chicago investment firm focused on the health care industry. Hayes joined Water Street as controller in 2008.

The number of international homebuyers declined sharply throughout the United States in the past year amidst the global COVID-19 pandemic, according … END_OF_DOCUMENT_TOKEN_TO_BE_REPLACED

Tom Rodeno, 50, a 20-year veteran in representing industrial spaces for Colliers International, based out of the Rosemont office with the title of … END_OF_DOCUMENT_TOKEN_TO_BE_REPLACED

A community in western Illinois has officially disbanded its police department over budget concerns. East Galesburg has been without its police … END_OF_DOCUMENT_TOKEN_TO_BE_REPLACED

The officer who died was the first Chicago cop shot and killed in the line of duty this year, Brown said. It's the first line-of-duty shooting … END_OF_DOCUMENT_TOKEN_TO_BE_REPLACED