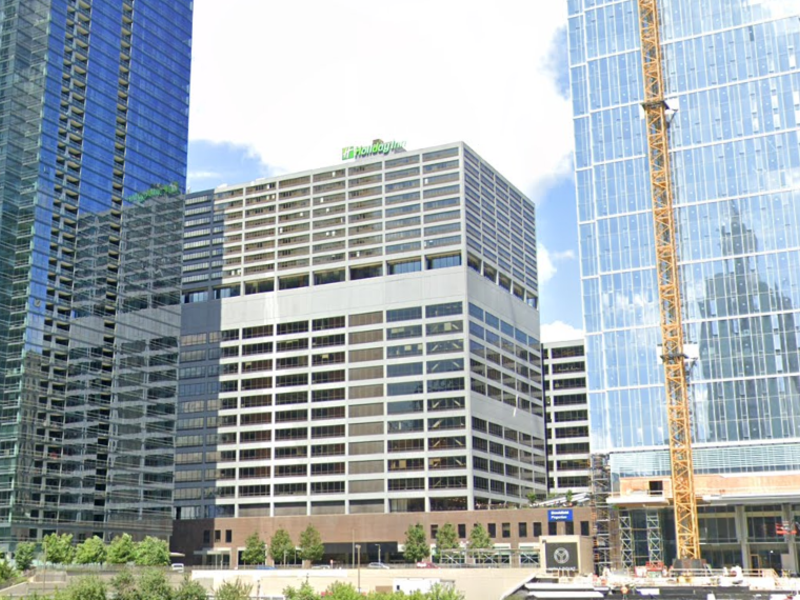 If the deal is finalized, it would mark a bold wager on a downtown hotel amid a COVID-19 crisis that has sapped travel and raised questions about how long it will take for demand to recover. Murphy, who is known for redeveloping vintage downtown properties into hotels, is also betting on the future of Wolf Point, where Houston-based developer Hines has completed two residential towers and is now building a 60-story office tower that will be anchored by software giant Salesforce.

Sources said Murphy’s venture would buy the leasehold interest in the hotel from a partnership tied to the estate of late Chicago real estate developer Edward Ross, who, along with his late business partner Jerrold Wexler, founded the Jupiter Industries conglomerate that built the hotel in 1976. Murphy is expected to execute a new 99-year ground lease with New York-based private-equity giant Blackstone Group—which owns the former Apparel Center building on which the hotel sits—and redevelop the property with a different brand within the IHG Hotels & Resorts family. The purchase price is said to be close to the nearly $23 million in debt the hotel’s owners have on the property, according to Cook County property records.

Spokesmen for Murphy Development Group and the hotel’s owners couldn’t be reached. A Blackstone spokesman did not immediately provide a comment.

Murphy is showing confidence in the future of a downtown hotel market that has recently shown small signs of recovery. With COVID restrictions relaxing, occupancy at downtown hotels that were open during the last week of May was 42 percent, the highest for any single week since the pandemic began, according to hospitality data and analytics company STR. That’s still well below a typical pre-pandemic May occupancy rate above 80 percent, but a big step up from the first year of the pandemic, when many hoteliers shuttered their properties amid paltry demand and occupancy never rose higher than 27 percent for a single week.

The Holiday Inn Chicago Mart Plaza has been closed since early December, according to its website.

Murphy has transformed a series of Chicago properties into hotels, most recently overhauling the former Cook County Hospital into a dual-brand Hyatt Place and Hyatt House hotel. He previously redeveloped a vintage Loop office building into a Hyatt Centric hotel, turned the office portion of the former Oriental Theatre building into the Cambria Hotel & Suites and converted the Chicago Motor Club Building into a Hampton Inn.

His pending Holiday Inn project comes as more downtown hotels have hit the market, testing investor appetite for properties in the COVID-battered hospitality sector. The Talbott Hotel in River North, Blackstone Hotel on Michigan Avenue and dual-brand Hampton Inn/Homewood Suites Mag Mile in Streeterville have all gone up for sale in the past few months.

The number of international homebuyers declined sharply throughout the United States in the past year amidst the global COVID-19 pandemic, according … END_OF_DOCUMENT_TOKEN_TO_BE_REPLACED

Tom Rodeno, 50, a 20-year veteran in representing industrial spaces for Colliers International, based out of the Rosemont office with the title of … END_OF_DOCUMENT_TOKEN_TO_BE_REPLACED

Chicago’s city officials move the deadline for submitting a proposal for the planned casino to October 29, looking for more bidders. Chicago … END_OF_DOCUMENT_TOKEN_TO_BE_REPLACED

A community in western Illinois has officially disbanded its police department over budget concerns. East Galesburg has been without its police … END_OF_DOCUMENT_TOKEN_TO_BE_REPLACED

The officer who died was the first Chicago cop shot and killed in the line of duty this year, Brown said. It's the first line-of-duty shooting … END_OF_DOCUMENT_TOKEN_TO_BE_REPLACED