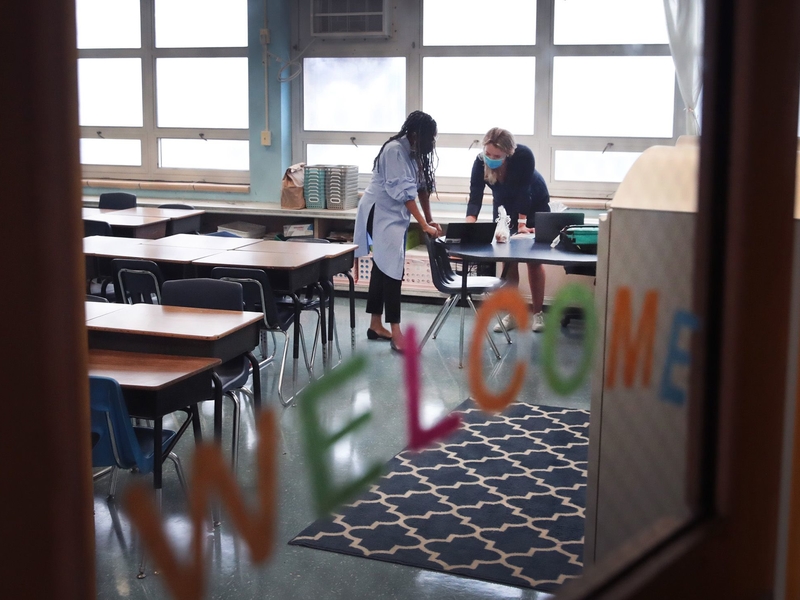 The change raises questions about how schools might quantify the academic fallout from the pandemic. The MAP math and reading tests — administered by the nonprofit NWEA — are nationally normed exams that measure growth during a school year and provide a snapshot of how Chicago students learn compared to their peers across the country.

But officials said the new assessments will let educators gauge student learning faster and more accurately, better guiding them as they tailor instruction to student needs. One set of assessments is part of the new universal Skyline curriculum the district is rolling out this summer, which is voluntary for schools; the other is a collection of quick assessments available in both English and Spanish.

The change also raises questions about what tests, if any, the district might use to rate its schools and evaluate its teachers and principals going forward. The MAP math and reading tests factored into the district’s controversial school ratings program, known as SQRP, as well as employee evaluations, admissions to selective enrollment and other competitive  programs, and student promotion to the next grade.

In a presentation to the school board Wednesday, officials said the district continues to work on a comprehensive review of its school ratings process, which critics say has relied on test scores too heavily and penalized schools that serve high-needs student populations. It is not clear at this point which tests, if any, will count toward any reimagined school ratings. As for teacher and principal evaluations, the district said it is “exploring options.”

Some school board members praised the shift, saying that the MAP tests had come to be associated with a punitive approach to assessment in the district. They said the new tests will give educators more relevant, real-time information about how students are doing and what academic gaps they need to address in the classroom.

“We’re putting the power back in teachers’ hands by doing this,” said school board member Amy Rome.

But the change comes at a critical juncture. New national data from NWEA shows the pandemic widened pre-pandemic test score gaps by race and economic status, and that those disparities were most pronounced for the country’s youngest students and those attending high-poverty schools. The results are considered among the most comprehensive national accounting so far of academic setbacks. Without a benchmark to compare pre-pandemic growth, it’s not clear how Chicago would measure its own students’ academic progress.

Schools and districts across the country are grappling with the question of how best to assess the academic damage from the pandemic, in order to steer help and additional resources to the students who have most fallen behind.

Chicago cancelled MAP administration during the pandemic. The district said in 2020 it planned to evaluate its usage of the test after an inspector general investigation found irregularities in how it was administered at some campuses.

Individual campuses can still choose to stick with the MAP. Otherwise, they can opt to embrace the new Skyline assessments or a suite of quick tests called Star 360 from test-maker Renaissance, which are also available in Spanish. Officials said 80% of schools have already decided, with input from their teachers, to make the transition to the new Skyline or Star 360 tests.

“These assessments truly measure what matters,” said Peter Leonard, executive director of student assessment, about the Skyline tests, which he said tie meaningfully into the curriculum.

He stressed neither set of exams will be used for district accountability purposes. Officials vowed that educators will receive training and support as they transition to the new assessments.

“This will not be and was not intended to be used for accountability,” member Elizabeth Todd-Breland said. “This will have a major impact on our students and their learning.”

District officials said Wednesday that Chicago students will continue to take required state testing, but the future of the state’s main assessment — the Illinois Assessment of Readiness — is similarly up in the air. Illinois is seeking a new vendor, but earlier this summer the state school board delayed a key vote after educators and parents demanded more transparency and time for input.

The number of international homebuyers declined sharply throughout the United States in the past year amidst the global COVID-19 pandemic, according … END_OF_DOCUMENT_TOKEN_TO_BE_REPLACED

Tom Rodeno, 50, a 20-year veteran in representing industrial spaces for Colliers International, based out of the Rosemont office with the title of … END_OF_DOCUMENT_TOKEN_TO_BE_REPLACED

Chicago’s city officials move the deadline for submitting a proposal for the planned casino to October 29, looking for more bidders. Chicago … END_OF_DOCUMENT_TOKEN_TO_BE_REPLACED

A community in western Illinois has officially disbanded its police department over budget concerns. East Galesburg has been without its police … END_OF_DOCUMENT_TOKEN_TO_BE_REPLACED

The officer who died was the first Chicago cop shot and killed in the line of duty this year, Brown said. It's the first line-of-duty shooting … END_OF_DOCUMENT_TOKEN_TO_BE_REPLACED