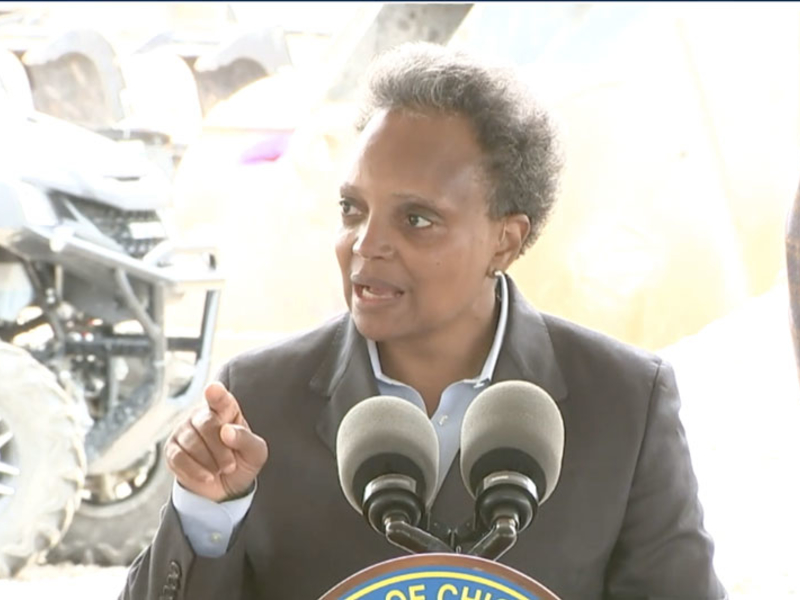 Both Lightfoot and Gov. J.B. Pritzker have raised the city’s violent crime issue with President Joe Biden in recent weeks, and the mayor acknowledged it came up while she was in San Francisco pitching the city as a tech hub. A federal strike force is headed to Chicago and to several other big cities experiencing high crime to battle illegal gun trafficking.

The mayor has pointed to trafficked guns from bordering states, including Indiana, for driving violence in the city. She and Police Superintendent David Brown have also blamed a slowdown in court activity and what they say is the overreliance on electronic monitoring and pretrial release of arrestees for increased violence, but have provided largely anecdotal evidence to back up their claim.

Cook County State’s Attorney Kim Foxx alluded to the disagreement at a separate news conference with Pritzker today. The violence is horrific, Foxx said, but should not be used as political fodder. “I often have to remind people, 2016 was one of the bloodiest years since 1999. We instituted bond reform in 2017, and violent crime went down.” It decreased in 2018 and 2019, as well, but rose alongside the pandemic.

The crisis demands bold and creative action, the mayor said, opting not to spread blame. “It demands more of me. I willingly and unapologetically accept this challenge.”

In the first of what she says will be a series of specific investments to address long-term systemic causes and “the immediate consequences” of the violence we’re experiencing now, the mayor announced the coming launch of a $1 million reward fund for information that leads to the seizure of illegal firearms. A tip line would offer anonymity, if callers wanted it, and would be set up through the Chicago Police Department. The money comes from the city’s corporate fund. CPD has already seized 6,300 guns this year, and are on track to collect a record 12,000 illegal firearms.

“Our city is awash in illegal firearms,” the mayor said.

“I know that unless every one of our residents feel safe in their homes, on their block, in their neighborhoods and across our city, nothing else matters,” she continued, “The cloud of violence that hangs over our heads and blots out all of the sunshine that we should be feeling having come through a difficult, dark period. Yes, we are actually making progress. The data tells us that: Year over year, month over month, both homicides and shootings are down. But I also know that this statistical progress is cold comfort to the individuals and neighborhoods who are still living in daily fear.”

The number of international homebuyers declined sharply throughout the United States in the past year amidst the global COVID-19 pandemic, according … END_OF_DOCUMENT_TOKEN_TO_BE_REPLACED

Tom Rodeno, 50, a 20-year veteran in representing industrial spaces for Colliers International, based out of the Rosemont office with the title of … END_OF_DOCUMENT_TOKEN_TO_BE_REPLACED

Chicago’s city officials move the deadline for submitting a proposal for the planned casino to October 29, looking for more bidders. Chicago … END_OF_DOCUMENT_TOKEN_TO_BE_REPLACED

A community in western Illinois has officially disbanded its police department over budget concerns. East Galesburg has been without its police … END_OF_DOCUMENT_TOKEN_TO_BE_REPLACED

The officer who died was the first Chicago cop shot and killed in the line of duty this year, Brown said. It's the first line-of-duty shooting … END_OF_DOCUMENT_TOKEN_TO_BE_REPLACED