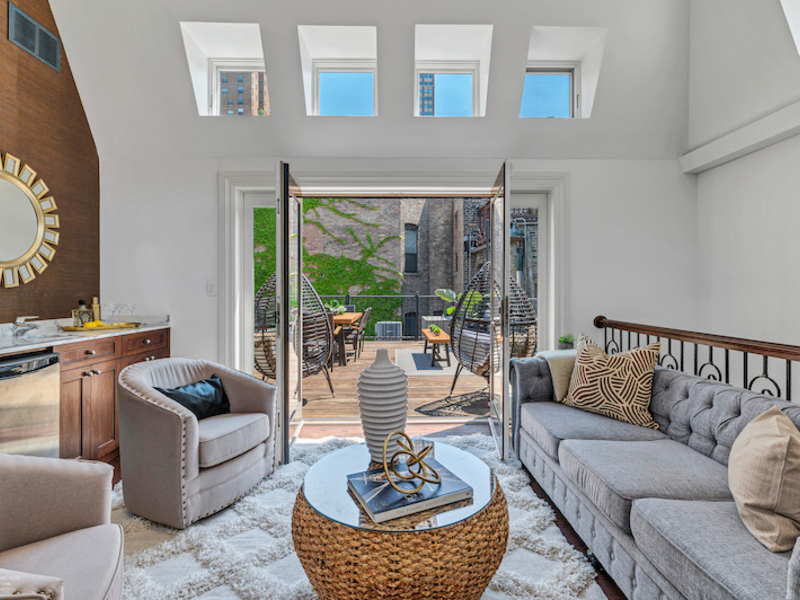 The Pulidos were married but living apart, she in Chicago and he still in their native Australia, in 2004 when he came for one of his regular visits “and she told me she had bought a house.”

They then spent over a year rehabbing the place, with an eye toward “giving it a modern, elegant aesthetic,” Rena Pulido said, “while also respecting its past.”

Working with interior designer and architect Despina Souhlas of studio ESS in Chicago, they opened up the main rooms up from their cramped historical layout, put a wine room and guest suite in the basement, and redid the kitchen and baths, not to mention turning a low-ceilinged top-floor space into the airy, sunlit space it is now.

The Pulidos are relocating back to Australia. They had this house on the market prior to the pandemic, then rented it out for the duration. Now they plan to put the four-bedroom, 3,200-square-foot home back on the market June 14. Represented by Karen Ranquist of Berkshire Hathaway HomeServices Chicago, it’s priced at a little over $1.62 million.

See more homes in our Before It Hits The Market series.

The number of international homebuyers declined sharply throughout the United States in the past year amidst the global COVID-19 pandemic, according … END_OF_DOCUMENT_TOKEN_TO_BE_REPLACED

Tom Rodeno, 50, a 20-year veteran in representing industrial spaces for Colliers International, based out of the Rosemont office with the title of … END_OF_DOCUMENT_TOKEN_TO_BE_REPLACED

A community in western Illinois has officially disbanded its police department over budget concerns. East Galesburg has been without its police … END_OF_DOCUMENT_TOKEN_TO_BE_REPLACED

The officer who died was the first Chicago cop shot and killed in the line of duty this year, Brown said. It's the first line-of-duty shooting … END_OF_DOCUMENT_TOKEN_TO_BE_REPLACED