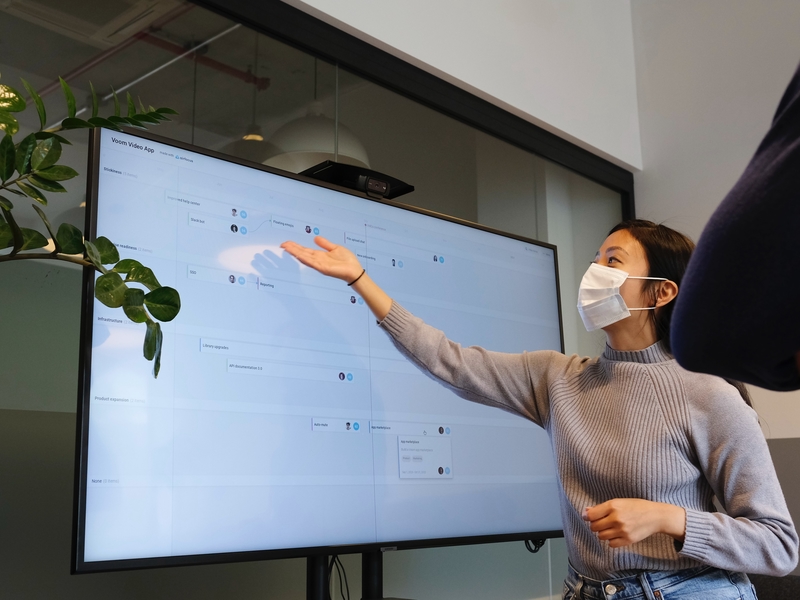 That’s partly because some private companies—particularly the smaller ones—are generally less well-prepared than their larger brethren to afford a legal fight if even one employee raises a ruckus over management’s vaccine policy.

Issues such as mask wearing and social distancing at work are likely to sort themselves out in short order. But local labor lawyers say the paramount question most business owners are asking right now concerns vaccinations. Should I require them? Can I legally require them?

The answers so far are maybe and maybe, much to the consternation of employers who are looking to set hard and fast rules as they open their doors again after the year-long pandemic pause. Experts say precedents so far are sketchy on the subject of inoculation, and that the situation is changing as new rules are being considered.

So far, one big institution, Rutgers University, the state school in New Jersey with an enrollment of 65,000, has firmly announced that all students and faculty—there are 9,000 of those—must have their vaccines before returning to campus in the fall. There was some expectation that this move would be followed by a succession of similar announcements from both the public and private sectors. But as of this week, no significant institution had jumped on board alongside Rutgers. At the same time, no major group has risen up to speak out against the Rutgers decision.

“So far, Rutgers is looking like a frontrunner on vaccine policy-making,” says Stephen A. Glickman, a Chicago lawyer who has focused on labor and employment issues for more than three decades. “The plain fact is that an employer can require an employee under guidelines from the Centers for Disease Control to get vaccinated.”

That’s strictly true, though other experts point out that the issue gets more complicated than that. When the first vaccines were rolling out in December the U.S. Equal Employment Opportunity Commission met and indicated that employers could require their workers to get vaccinated. But there was additional language in the agency’s edict that suggested that during the current Emergency Use Authorization period that has helped fast-track vaccine roll-outs people have some right to refuse to take a shot. Courts have not yet decided on this issue, so there is some legal risk for employers drafting vaccine mandates, according to Matthew J. Geery, a principal with the Chicago firm Much Shelist.

“In general, companies can demand vaccinations,” Geery says. “But there are questions and risks that arise with such a demand. Companies have to carefully consider this: even if they can demand vaccines, should they? Different companies in different industries are likely to approach this issue from their own unique perspectives. A retailer will have very different needs than a manufacturer.”

Every lawyer agrees that no vaccine requirement can be made 100 percent foolproof. Every employer must adhere to the Americans with Disabilities Act, which could grant people exemptions from shots for religious and medical reasons. However, it’s hard to see how genuine exemptions will amount to much. Jehovah’s Witnesses have been allowed vaccines since the introduction of polio jabs in the 1950s, while the Christian Science and the Congregation of Universal Wisdom faiths forbid vaccine care. The local population of the latter is infinitesimal while it’s estimated there are fewer than 50,000 Christian Science followers in the entire U.S.

So the applications for ADA exemptions are likely to be few in number. But researchers do confirm that a scant number of those receiving inoculations have had adverse reactions; a few have even died, though exact causes of death are generally unknown. “If an employee has an adverse reaction to a shot required by an employer, then there will be lawsuits,” predicts Terry J. Smith, a labor lawyer with the Chicago firm of Smith O’Callaghan & White in Chicago. Does the decades-old requirement that workers and students in public schools get vaccinated against polio and a host of other diseases serve as a precedent? Smith is doubtful. “That won’t provide sufficient legal cover for the private employer,” he says.

Legal liability can go both ways, the experts add. Recent polling has suggested that 20 percent or more of adult Americans are vaccine hesitant so far. If there is no mandate for vaccination and a worker contracts the virus from an unvaccinated co-worker, can’t the sickened person sue the employer over unsafe working conditions? Yes, that could happen, Glickman admits, but the sickened employee “would have to somehow prove that he got the virus from being forced to work too close to a fellow employee who was infected. It’s difficult to show that you got covid from any single person or environment.”

Glickman adds that big and small businesses will face liabilities tied to the scale of their workforces. “A company like Walmart is likely to face thousands of lawsuits and class actions on an issue like vaccinations, but it can absorb the legal cost far more easily than the small shopkeeper with 15 employees who might have just one of them file a lawsuit,” he says.

Glickman takes a harder stance, finally, than other lawyers interviewed on this issue, saying that he expects most employers eventually will require vaccinations. Others aren’t so sure. “What if a key employee refuses to get vaccinated? Can you afford to have workers quitting over this issue?” says Geery of Much Shelist. “Employers have to think carefully. Instead of requiring a vaccine maybe you just strongly encourage it for now.”

There are other alternatives, of course. Some employers are already offering incentives, including cash awards, to those providing proof of vaccination. They’re legal, attorneys say, unless the prizes are weighted more heavily in certain departments or classes of workers. Other companies are sponsoring vaccinations themselves, in some cases by offering convenient shots in clinics at work. Lawyers mostly oppose that avenue, pointing out that a worker sickened in a company-sponsored setting could set off all kinds of legal claims. Workers are probably best-advised getting their shots from a Walgreens instead of a company nurse, in other words.

So far, lawyers say, there is no single legal template available online that companies might borrow to draft internal policies. Employers are encouraged to talk to their own counsels separately. Real help could come from local or even national government agencies drafting laws and ordinances. What if the city of Chicago, for instance, were to enact a resolution requiring all local workers to get vaccinated? “Employers could get some legal relief if local government were to step in,” says Terry Smith. “But it would not be full protection. Local laws can still be pre-empted or overruled by state and federal laws.” He forecasts that lawsuits are likely to proliferate on vaccines. “This is likely to be debated through appellate levels and eventually reaching the Supreme Court,” he says. Another attorney adds: “A tough issue like this is one reason why labor lawyers don’t go out of business.”

The number of international homebuyers declined sharply throughout the United States in the past year amidst the global COVID-19 pandemic, according … END_OF_DOCUMENT_TOKEN_TO_BE_REPLACED

Tom Rodeno, 50, a 20-year veteran in representing industrial spaces for Colliers International, based out of the Rosemont office with the title of … END_OF_DOCUMENT_TOKEN_TO_BE_REPLACED

Chicago’s city officials move the deadline for submitting a proposal for the planned casino to October 29, looking for more bidders. Chicago … END_OF_DOCUMENT_TOKEN_TO_BE_REPLACED

A community in western Illinois has officially disbanded its police department over budget concerns. East Galesburg has been without its police … END_OF_DOCUMENT_TOKEN_TO_BE_REPLACED

The officer who died was the first Chicago cop shot and killed in the line of duty this year, Brown said. It's the first line-of-duty shooting … END_OF_DOCUMENT_TOKEN_TO_BE_REPLACED