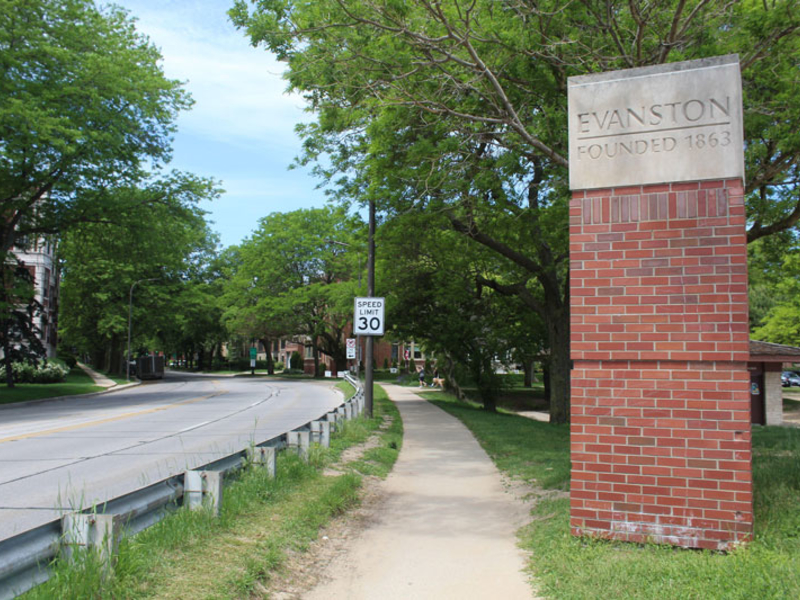 Late Wednesday night, the House Judiciary Committee voted 25-17 to advance a bill to study the effects of slavery and discrimination—and recommend remedies. It’s the first time the full Congress will consider the measure, H.R. 40, which has been introduced in every session since the late 1980s.

“This legislation is long overdue,” Judiciary Chairman Jerry Nadler, a New York Democrat, said. “Even long after slavery was abolished, the anti-Black racism that undergirded it reflected and defined part of our nation’s attitudes, shaping its policies and institutions.”

In Evanston, policy makers and residents have begun to experiment with their own program of reparations. The north suburb, home to about 75,000 residents, is proud of its progressive values and diverse population. About 16% of the city’s residents are Black; some have lived there for more than 100 years.

There’s also a legacy of housing discrimination. Like almost every American city in the 20th century, Evanston made it difficult for Black people to buy their own homes and to keep the homes they could buy. It’s this injustice—not slavery— that Evanston is attempting to redress with the public reparations plan it enacted in 2019.

Evanston’s program faced little organized opposition—its biggest critics said the scope, $10 million over 10 years, was too modest and that the program didn’t rise to the level of “reparations.” As the city moved from idea to implementation, it’s come up against new challenges. Restitution is complex and emotional no matter the scale, and the questions Evanston struggled to answer are ones that any more comprehensive effort will have to address.

Is every Black person eligible?

When Evanston’s Black residents were asked about what harms a local reparations program should try to repair, many told stories about housing discrimination. In the years before World War I, the city’s housing policies pushed Black residents into a neighborhood marked by a drainage canal on one side and railroad tracks on another. Prices were higher than they should have been and mortgages harder to come by. Redlining officially began in the 1930s. So did a long period of underinvestment by the city, predatory loans, and contract buying.

Where’s the money going to come from?

As the city council was talking about reparations, a new source of funding emerged: a local sales tax on recreational marijuana, which would become legal in 2020. No one had claims on the money and, for many, it seemed an obvious payback. Years of prohibition and over policing had a disproportionate effect on Black residents of Evanston, says Ann Rainey, the council member who came up with the idea. The city council estimated that the 3% sales tax would bring in about a million dollars a year. They decided to set aside the first $10 million, though not all of it will go to addressing housing inequities.

How much do they get?

The council decided to award grants of $25,000 to help residents buy a house or fix up or make payments on one they already own. It’s not a lot of money in Evanston, where the average home sells for 12 times that. Most Black residents won’t get anything this first round.

During the pandemic, the city’s only legal pot dispensary was able to stay open, but Evanston couldn’t collect the sales tax until July. The city council decided to begin the reparations program with just $400,000, which covers grants for 16 people.

Are there strings attached?

The residents won’t get the cash directly. That might require them to pay taxes on it. Instead, the money will go to the financial institution, closing agent, or contractor the resident is working with. Robin Rue Simmons, the alderman who proposed the reparations program, and her colleagues want residents to be able to work with local Black owned businesses and banks that have a history of fair lending.

The number of international homebuyers declined sharply throughout the United States in the past year amidst the global COVID-19 pandemic, according … END_OF_DOCUMENT_TOKEN_TO_BE_REPLACED

Tom Rodeno, 50, a 20-year veteran in representing industrial spaces for Colliers International, based out of the Rosemont office with the title of … END_OF_DOCUMENT_TOKEN_TO_BE_REPLACED

Chicago’s city officials move the deadline for submitting a proposal for the planned casino to October 29, looking for more bidders. Chicago … END_OF_DOCUMENT_TOKEN_TO_BE_REPLACED

A community in western Illinois has officially disbanded its police department over budget concerns. East Galesburg has been without its police … END_OF_DOCUMENT_TOKEN_TO_BE_REPLACED

The officer who died was the first Chicago cop shot and killed in the line of duty this year, Brown said. It's the first line-of-duty shooting … END_OF_DOCUMENT_TOKEN_TO_BE_REPLACED