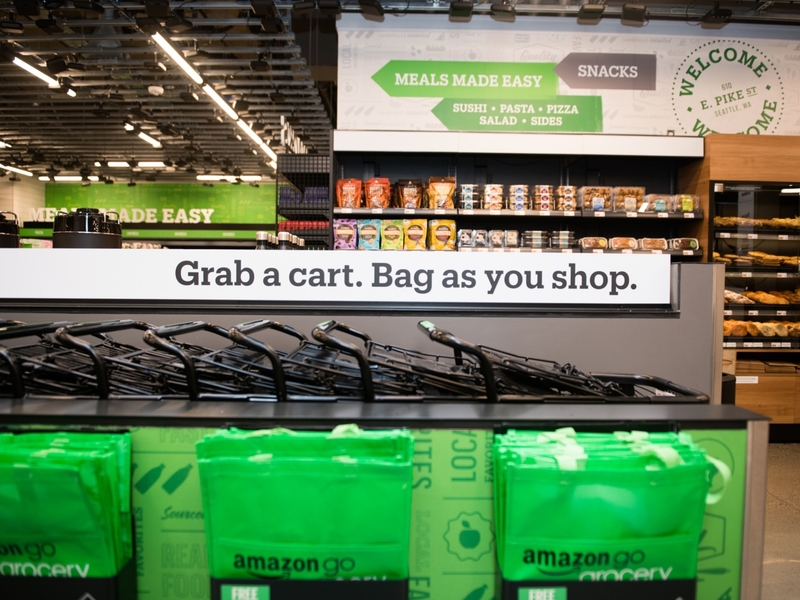 Instead, Amazon developed the Dash smart cart, whose sensors and cameras add up purchases as shoppers cruise the aisles. The carts stop short of a seamless, Go shopping experience. They hold only a couple of bags of food, and shoppers can’t take them outside, forcing them to transfer bags to a low-tech cart or lug their food to the parking lot.

Tracking dozens of people across a big store is technically challenging, but cost has also slowed the adoption of cashierless technology. Equipping a 2,000-square-foot convenience store with cameras can be done with a few dozen devices. Covering a much larger full-service supermarket, which in the U.S. tend to range from 30,000 square feet to 50,000 or more, can require exponentially more cameras and servers to process and store video. That can quickly chew through the benefits of employing fewer cashiers or luring more people into the store with the promise of a seamless checkout.

Amazon has been working for years to streamline its Just Walk Out system, making the gear more cost effective for its own stores as well as appeal to other companies that might license the technology. Even when Amazon was exclusively opening small convenience stores, the company’s engineers were asked to build a version of the technology that would be viable in stores larger of 30,000 square feet or more, according to one person briefed on the plans.

Last year, the company also introduced Amazon One, which lets shoppers use their palms to pay at its convenience, book and 4-Star stores in the Seattle area. Amazon on Wednesday said thousands of customers had signed up and that it had introduced the service to a Whole Foods Market store in the city and planned to roll it out in other locations.

The Connecticut store under construction is about 34,000 square feet, including stockrooms, back office space and an ample staging area for online orders. The sales floor—the area that would need to be policed by camera arrays—is about 20,000 square feet.

That’s almost three times the size of the retail floor at the largest stores currently using Just Walk Out technology. Amazon operates two Go Grocery-branded stores in the Seattle area. Both have about 7,000 square feet of retail space.

The Connecticut location also has 320 square feet of space split between two rooms for server racks and other electrical equipment, a feature that doesn’t appear in plans for some other already open Amazon Fresh stores. The plans also show a set of conventional checkout counters.

Amazon isn’t identified by name in the planning documents, but the similarities between the documents and others the company has filed around the country leave little doubt as to its tenant. The strip mall’s owners described the firm behind the grocery store as an “extremely secretive” technology company in a city planning meeting in October, that was reported earlier by the News-Times newspaper of nearby Danbury, Connecticut. The owners said the store operator would have 50 or 60 locations by the time the Brookfield store opened, if permitting was approved on time, which lines up with the Amazon Fresh expansion.

The documents don’t make clear what role, if any, Dash smart carts will have in the Brookfield store. Nor is it clear how quickly Amazon will bring Go technology to other Fresh locations, although former employees of an Amazon grocery store that has yet to open in Virginia recently told the Washington Business Journal that elements of Amazon Go technology would be included in that location.

The number of international homebuyers declined sharply throughout the United States in the past year amidst the global COVID-19 pandemic, according … END_OF_DOCUMENT_TOKEN_TO_BE_REPLACED

Tom Rodeno, 50, a 20-year veteran in representing industrial spaces for Colliers International, based out of the Rosemont office with the title of … END_OF_DOCUMENT_TOKEN_TO_BE_REPLACED

Chicago’s city officials move the deadline for submitting a proposal for the planned casino to October 29, looking for more bidders. Chicago … END_OF_DOCUMENT_TOKEN_TO_BE_REPLACED

A community in western Illinois has officially disbanded its police department over budget concerns. East Galesburg has been without its police … END_OF_DOCUMENT_TOKEN_TO_BE_REPLACED

The officer who died was the first Chicago cop shot and killed in the line of duty this year, Brown said. It's the first line-of-duty shooting … END_OF_DOCUMENT_TOKEN_TO_BE_REPLACED