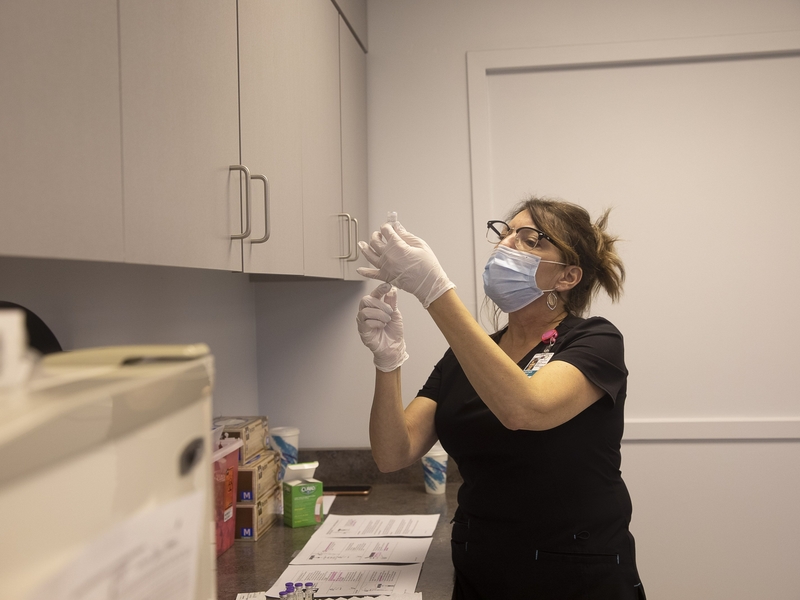 For the first time since the city’s vaccine campaign began four months ago, Chicago has enough doses to send to all health providers who wanted one, Chicago Department of Public Health Commissioner Allison Arwady said in a social media Q&A today.

That news comes despite the national pause on use of the Johnson & Johnson vaccine, which Chicago had planned to use at several mass vaccination sites and for essential workers in restaurants and the city’s airports. The state announced last week it would send the city enough doses to vaccinate 50,000 people, a supplement to the city’s direct federal allocation.

“There are whole parts of downstate that are not filling vaccine appointments, and that has not been our experience here,” Arwady said. Over the weekend, the city announced it had vaccinated 50 percent of all Chicago adults, meeting a projection Arwady set in late March.

But at an earlier event on Tuesday, city officials sounded the alarm that vaccination rates among Black Chicagoans are lagging while their infection rates rise.

Test positivity, COVID hospitalizations and deaths among Black Chicagoans remains high while vaccination rates among Black adults are half the city’s average, Mayor Lori Lightfoot said at an event celebrating the mass vaccination site at Chicago State University on the city’s Southeast Side. The mayor called it a “disturbing trend,” and said in some places, only 12 or 15 percent of Black adults had received a shot.

“Black Chicagoans are once again getting sicker, requiring hospital care, and dying more than any other demographic in our city,” she said, and while “we understand the trepidation, the fears and concerns…  we need to send out the alarm, make sure Black South Siders understand you must get the vaccine, it is safe.”

The number of international homebuyers declined sharply throughout the United States in the past year amidst the global COVID-19 pandemic, according … END_OF_DOCUMENT_TOKEN_TO_BE_REPLACED

Tom Rodeno, 50, a 20-year veteran in representing industrial spaces for Colliers International, based out of the Rosemont office with the title of … END_OF_DOCUMENT_TOKEN_TO_BE_REPLACED

A community in western Illinois has officially disbanded its police department over budget concerns. East Galesburg has been without its police … END_OF_DOCUMENT_TOKEN_TO_BE_REPLACED

The officer who died was the first Chicago cop shot and killed in the line of duty this year, Brown said. It's the first line-of-duty shooting … END_OF_DOCUMENT_TOKEN_TO_BE_REPLACED