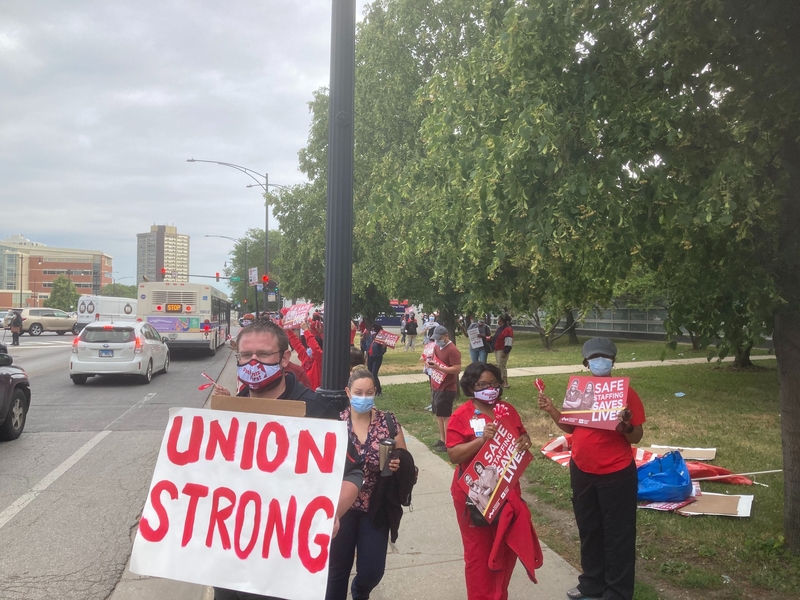 The strike slated to start this morning is open-ended, in contrast with the nurses’ one-day stoppage.

SEIU is pushing for Cook County to agree to “meaningful wage increases, proposals that respect equal pay for equal work, and agree to affordable health insurance,” the union said earlier this week.

The striking workers include custodians, technicians and administrative staff employed by Cook County Health, the Cook County jail and other departments across county government.

On Thursday, Cook County provided a counterproposal to the union on non-economic issues “that ignored nine months of discussions,” Dian Palmer, Local 73 president, said in the late-Thursday statement. “It’s clear they are not taking these negotiations seriously.”

The union is particularly pushing back against an increase in health care premiums. In a statement last week, Cook County Board President Toni Preckwinkle said “we have not asked employees for an increase in six years, even though our costs have increased. This is needed in this round of bargaining.”

Local 73 represents about 2,500 county workers, but the union said in its statement late Thursday night that about 476 workers would be kept from striking from a court-ordered injunction requested by Cook County Health.

On Thursday, hundreds of nurses held a one-day strike against Cook County Health over staffing issues, forcing the health system to postpone some surgeries and divert ambulances elsewhere.

The number of international homebuyers declined sharply throughout the United States in the past year amidst the global COVID-19 pandemic, according … END_OF_DOCUMENT_TOKEN_TO_BE_REPLACED

Tom Rodeno, 50, a 20-year veteran in representing industrial spaces for Colliers International, based out of the Rosemont office with the title of … END_OF_DOCUMENT_TOKEN_TO_BE_REPLACED

Chicago’s city officials move the deadline for submitting a proposal for the planned casino to October 29, looking for more bidders. Chicago … END_OF_DOCUMENT_TOKEN_TO_BE_REPLACED

A community in western Illinois has officially disbanded its police department over budget concerns. East Galesburg has been without its police … END_OF_DOCUMENT_TOKEN_TO_BE_REPLACED

The officer who died was the first Chicago cop shot and killed in the line of duty this year, Brown said. It's the first line-of-duty shooting … END_OF_DOCUMENT_TOKEN_TO_BE_REPLACED